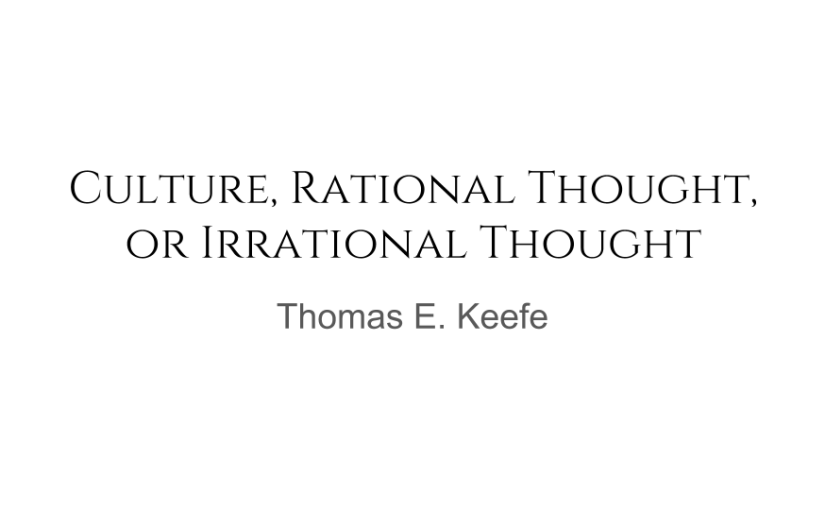 Here are a few other optional links on Rational Choice if you’re interested: 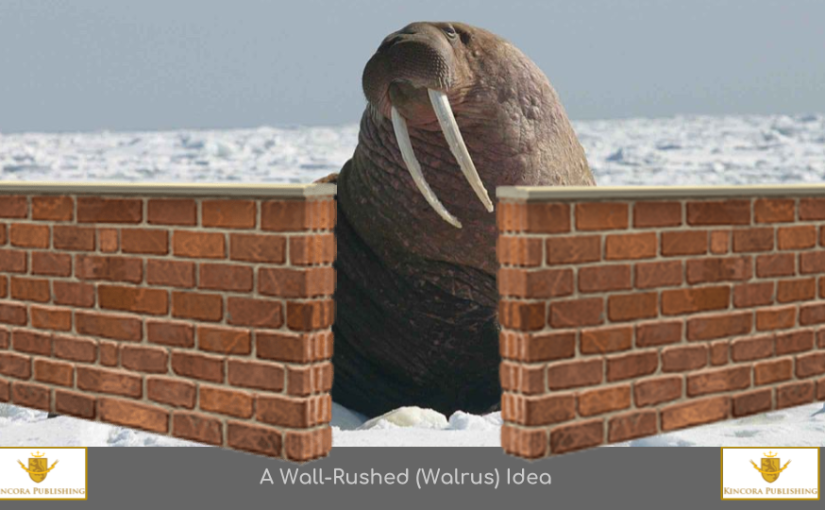 “President and Mrs. Obama built/has a ten foot Wall around their D.C. mansion/compound,” he wrote then. “I agree, totally necessary for their safety and security. The U.S. needs the same thing, slightly larger version!” (December 30, 2018)

First of all, Trump wanted a wall across the southern border of the United States, not around every individual home, but, whatever…

This week, at the first cabinet meeting of the New Year, there were a couple of other questionable comments about walls.

“Look, look, when they say the wall’s immoral well then you — you’ve got to do something about the Vatican because the Vatican has the biggest wall of them all.” (January 2, 2019)

That’s a repeat of when Trump aide Dan Scavino tweeted in 2016 that the Pope was a hypocrite on immigration because Vatican City was surrounded by massive walls. As CNN’s Daniel Burke wrote at the time: “Yes, the Vatican does have walls, and some are quite large. But anyone can stroll through the Pope’s front yard — St. Peter’s Square — at nearly any time.”

So, I took Trump up on this statement and here’s a look at walls, past and present.

Though it may be called the United Kingdom of Great Britain and Northern Ireland today, it all began in Wessex almost 1100 years ago. From Wessex to England, England to Britain, Britain to Great Britain, the UK has had a few names changes as it grew from one of the seven Heptarchies into the British Empire. Here are the stories of the monarchs who ruled. 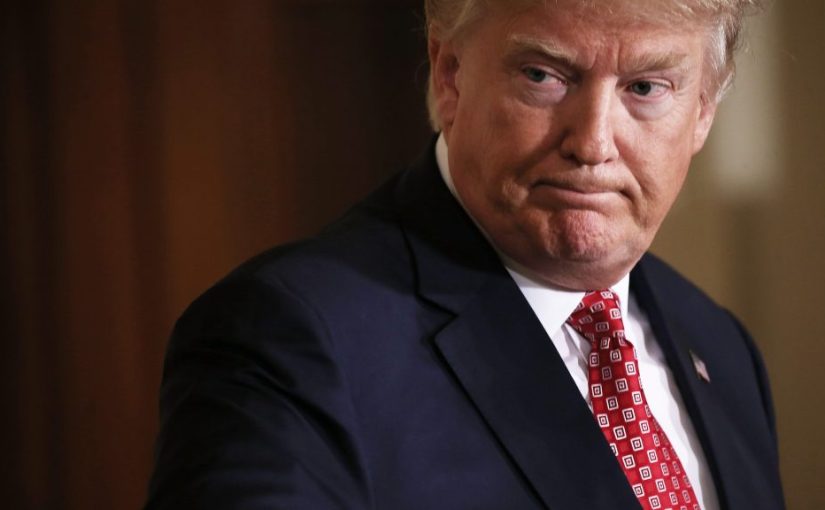 Two hundred and thirty-eight years ago, the French army was barracked in Providence, Rhode Island. On Christmas Eve 1780, the people of Providence celebrated with the Catholic French-speaking soldiers bunking at University Hall at Brown University, singing carols and lighting candles.

One hundred and four years ago, enemy soldiers stared across the cold battlefield of northern France and, out of respect for each other, a Christmas truce sporadically broke out along the Western Front… French, German, and British soldiers crossed trenches to exchange seasonal greetings and talk. In some areas, men from both sides ventured into no man’s land on Christmas Eve and Christmas Day to mingle and exchange food and souvenirs. There were joint burial ceremonies and prisoner swaps, while several meetings ended in carol-singing. Men played games of football with one another…

In World War II, specifically, on December 24, 1941, at precisely 4:30 p.m. on Christmas Eve, as dusk gathered and the temperature dropped, the red-coated Marine Band on the White House lawn struck up “Joy to the World,” accompanying choirs from area churches. Thousands had gathered in the fading light. After some further carols, the band began “Hail to the Chief.” As the sunset gun at nearby Fort Myer boomed, the president and Mrs. Roosevelt appeared on the South Portico with a group of guests, the Prime Minister Winston Churchill of the United Kingdom of Great Britain and Northern Ireland.

These days, instead of honoring allies like playing “Joy to the World” to the Prime Minister of Britain, or singing carols to French soldiers away from home to help America, no, instead of celebrating friends or even seeking a temporary white-flag with enemies like the 1914 Christmas Truce, as I’m recording this right now at approximately 6pm Eastern, the President of the United States has spent Christmas Eve 2018 sending out more than 10 tweets already today attacking Democrats, Republican Senator Bob Corker, Trump’s own former anti-terrorism envoy Brett McGurk… and complaining about US allies overseas… that’s right, rather than support foreign allies or seek a detente to the domestic tensions at home, President Trump shows he’s more Grinch than Gingrich, forcing a government shutdown for the holidays after the House and Senate had already passed a bi-partisan bill to avoid this, the third shutdown of the year. Oh, you know, the shutdown that, on December 11, 2018, Trump proudly declared “I’ll tell you what: I am proud to shut down the government for border security, Chuck. I will take the mantle… I will be the one to shut it down — I’m not going to blame you for it.”

Weird how now Trump and his few allies left, like Mark Meadows are trying to blame the Democrats in the Senate for blocking the appropriations bill. Apparently, the approximately 3 million Federal civil servants aren’t as important to the Republicans as Neil Gorsuch was, otherwise the filibuster rule would be removed entirely, right?

So here we are. The second year of the Trump Administration. The filibuster rule that was in place for 100 years has been removed by Republican Senators to seat a conservative justice. The US has broken its treaty responsibility under the Paris Agreement. The US has threatened its own allies in NATO. The US was withdrawn from the Iran Framework. The US has announced its withdrawal from NAFTA and renegotiated the agreement. The US has withdrawn from a nuclear weapons deal with Russia negotiated by Ronald Reagan. And, this fall, the US has done nothing as a Saudi resident-alien living in the United States is murdered on diplomatic grounds by the goons of Mohammed bin Salaman. Most recently, Trump talks with Turkish dictator Erdogan and then announces the withdrawal of US forces from Syria. Cui bono? Who benefits? Dictator Erdogan, Dictator Al-Assad, Dictator Putin, and -ironically- even the Iranian backed terrorist group Hezbollah… and who suffers? The stateless Kurds. The same Kurds that were betrayed by the US in ‘91, the same Kurds not given enough support in IS’ Northern Iraq offensive in 6/2014 & now Trump’s betrayal in 12/2018…

Why does Trump exude admiration for Dictator Xi when he removes term limits, builts re-education camps for the Uighers? Is it because Xi has recognized more than 125 trademarks for Trump and his families businesses in just these last two years?

So this Christmas Eve? December 24, 2018, when President Trump just tweeted out “I am all alone (poor me) in the White House”?

And this is the guy who complains, on Christmas Eve, that he’s all alone…. 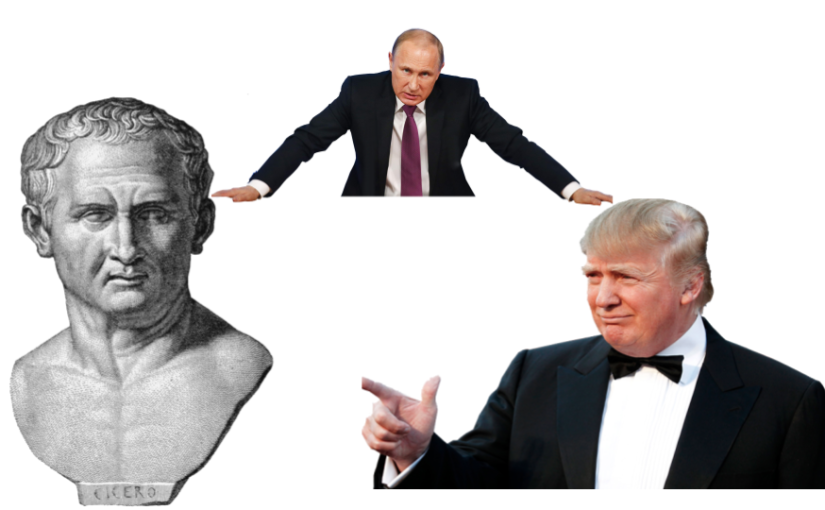 The classical Roman intellectual, Cicero, credited Lucius Cassius Longinus Ravilla with establishing the measurement of Cui bono? That is, ‘who benefits.’

Ambushed? Weird, the judge in the case asked that question and Flynn’s own lawyers said no on December 18, 2018 (https://abcnews.go.com/Politics/trump-wishes-flynn-good-luck-ahead-sentencing/story?id=59881667). Who benefits by continuing the argument and perpetuating the belief that Flynn was ambushed?

“We have defeated ISIS in Syria, my only reason for being there during the Trump Presidency.”

Only, we haven’t. James Stavridis: “We put out the active flames, but you still see smoldering little piles all around. You don’t just turn around and walk away from it because you know it’ll reflash. It’ll start up again. It’s a big mistake to walk away” (https://www.npr.org/2018/12/20/678577663/trump-says-isis-is-defeated-so-u-s-troops-will-leave-syria). Who benefits by continuing the argument and perpetuating the belief that ISIS had not been defeated?

Lindsey Graham, who has been described as one of Trump’s closest supporters in the US Senate said, “ I have not found one person, national security-wise, who believes it’s a good idea to remove the 2,200 troops, which was a small footprint, that was a bulwark against Iran expansion and insurance policy against the rise of ISIS. There was a widespread belief that ISIS has not been defeated. They’ve been hurt.”

Mattis, in fact, has resigned over this decision (https://www.cnn.com/2018/12/20/politics/donald-trump-jim-mattis-resignation/index.html)

Whatismore, Russian autocrat Vladimir Putin has gone on the record as saying “The fact that the US has decided to withdraw its troops is right” (https://www.aljazeera.com/news/2018/12/syria-putin-welcomes-trump-decision-pull-troops-181220113100797.html)

US ally France, with troops in northern Syria, was blindsided by the decision, disagrees that ISIS is defeated, and promises to stay (https://www.haaretz.com/middle-east-news/syria/france-says-troops-to-remain-in-syria-isis-not-defeated-1.6765709)

The decision, however, was praised by Turkey https://www.rferl.org/a/trump-syria-troop-pullout-islamic-state-russia-turkey-iran/29666375.html

In fact, the announcement was criticized by not only France but also Britain and Germany, who have all released statements saying that much remains to be done in Syria.

Doesn’t this sound as familiar as it sounds strange? France, Germany and the UK wrong, Turkey, Russia, and Syria right?

Republicans Lindsey Graham and the current US Secretary of Defense say wrong, but Trump says right?

And, the latest news? Today, Trump has announced troop withdrawals from Afghanistan as well.

~The United Kingdom of Great Britain and Ireland~

T.H. White, an American political journalist who covered the six presidential elections from 1960 to 1980 famously once said he only knew of three Presidential candidates who were faithful to their wives: Harry Truman, George Romney, and Jimmy Carter.

While it’s easy to either throw all the presidents under the bus or to blindly defend all of them (or at least our favorites), they are all individuals. Many owned slaves and having sexual relations with slaves was not uncommon. Also, many grew up in times when prostitution was legal. The Reynolds Affair, The Petticoat Affair and the infamous womanizing of Ben Franklin show that the Federal Period of American history had as much sexual scandal as our more modern era.

And we’re not even talking about pre-marital affairs….  Or how about the social acceptance or non-acceptance of age differences?

Grover Cleveland, at age 49, married one of his best friends’ daughter who was 21?? 28 years difference? And if you think that’s bad, Tyler and his second wife were 30 years apart….

But it goes beyond consensual heterosexual relationships, as I mentioned already, there is the issue of non-consensual, whether it be the infamous quote by Donald Trump to Billy Bush, Thomas Jefferson and Sally Hemmings or Bill Clinton and his relationships, specifically Monica Lewinski.

Washington, Harrison, and Taylor too are believed to have had sexual relations with their slaves….

Isn’t it interesting that Gary Hart’s career was ended over consensual sex, and Bill Clinton won the presidency in the very next election? Womanizing is ok, just don’t tell me about it, oh wait, now I know, that’s horrible in 1988 and I guess its ok in 1992 and 2016?

Think of all the social stigmas that have been used to judge people over time, and we all may have different opinions as to whether those were or are legitimate reasons for supporting or not supporting a political candidate. The presumed gay relationship between James Buchanan and VP William King

Deficiencies that may have actually impacted the execution of the office of the President like Grant’s alcoholism or W’s dry drunk syndrome.

And then there are the issues that have been used to derail political careers that are hard to understand such as Thomas Eagleton who had to drop out of the 1972 race because he received electrotherapy for depression… oh, but untreated depression like Nixon’s melancholy moodiness and presumed bouts of depression is ok….

And, speaking of 1972, Edmund Muskie had to drop out because he cried…. And then we wind up with John Boehner as the 53rd Speaker of the House lol

Douglas Ginsburg and so many others who lost their careers or the momentum of their careers because of drug use… then Bill Clinton famously says he didn’t inhale, and we wind up with a wider acceptance of marijuana use by politicians… Clinton, W, and Obama…

I mean heck, Bill Clinton essentially dodged the draft and even went to Russia during the Vietnam War and was elected President… just like W avoided Vietnam by joining the OK Air National Guard, then barely ever showed up.

The presidents of the United States have a collective history of owning slaves, Non-consensual sex, alcoholism, drug use, and draft dodging, and almost George Wallacesque use of racist rhetoric… and the losers? Some of them cried and sought treatment for mental health…

So, you know, if someone ever asks you if walking into a pot shop or grabbing a beer will derail your future political career, just remind them, heck, it might even increase your chances these days….