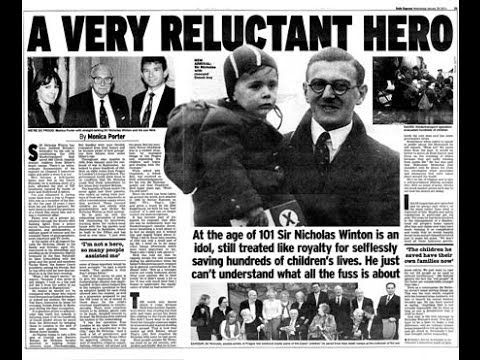 On this day, May 19, 1909, Nicholas George Winton (May 19, 1909 – July 1, 2015) was born in Wertheim, United Kingdom of Great Britain and Ireland. a British humanitarian who organized the rescue of 669 children, most of them Jewish, from Czechoslovakia on the eve of the Second World War in an operation later known as the Czech Kindertransport (German for “children transportation”). Winton found homes for the children and arranged for their safe passage to Britain. The world found out about his work over 40 years later, in 1988. The British press dubbed him the “British Schindler.”

The Schindlers of the World

All sister and brothers of Winton:

An Italian Catholic, A Japanese Shinto, a Polish Catholic woman, a Turkish Muslim and an Iranian Muslim; an American Protestant, A Swedish Lutheran, a Portuguese Catholic, and a Slovak Jew…. 6 religions, different genders, nationalities, and races…

What do these names all have in common?

They have all been given the honorific title of Schindler… If that’s not enough, think about what that says about Oskar Schindler himself? Having your name made into a title? Like Julius Caesar’s name became the title for Roman Emperors, Schindler’s name has become the term for the Caesar’s of Peace.

In no particular order, the other Schindlers:

Varian Mackey Fry died in Reading, Connecticut. Fry (October 15, 1907 – September 13, 1967) was an American journalist. While working as a foreign correspondent for the American journal The Living Age, Fry visited Berlin in 1935, and personally witnessed Nazi abuse against Jews on more than one occasion, which turned him into an ardent anti-Nazi. He said in 1945, “I could not remain idle as long as I had any chances at all of saving even a few of its intended victims.” Following his visit to Berlin, Fry wrote about the savage treatment of Jews by Hitler’s regime in the New York Times in 1935. Fry began and ran a rescue network in Vichy France that helped approximately 2,000 to 4,000 anti-Nazi and Jewish refugees to escape Nazi Germany and the Holocaust. He is known as the “American Schindler.”

For years, Giovanni Palatucci was considered the Italian Schindler. Sadly, it was discovered that his claims of helping Jews were a fraud. In fact, he was covertly helping in the deportation of Jews.

Gino Bartali (July 18, 1914 – May 5, 2000), on the other hand, was a world champion cyclist. Bartali used his fame to carry messages and documents to the Italian Resistance. Bartali cycled from Florence through Tuscany, Umbria, and Marche, sometimes traveling as far afield as Rome, all the while wearing the racing jersey emblazoned with his name. Neither the Fascist police nor the German troops wanted to risk upsetting the Italian people by arresting Bartali.

Bartali earned respect for his work in helping Jews who were being persecuted by the Nazis during the time of the Italian Social Republic. It emerged in December 2010 that Bartali had hidden a Jewish family in his cellar and, according to one of the survivors, and, by doing so, had saved their lives.

Rudolf Vrba is known for his escape from the Auschwitz concentration camp during World War II and for co-writing the Vrba–Wetzler report. The Vrba–Wetzler report provided some of the most detailed information about the mass murder taking Auschwitz.  Material from the Vrba–Wetzler appeared in newspapers and radio broadcasts in the United States and Europe throughout June and into July 1944, prompting world leaders to appeal to Hungarian regent Miklós Horthy to halt the deportations. On July 7th Horthy ordered an end to the deportations, fearing he would be held responsible after the war.  While 437,000 Jews had been deported, constituting almost the entire Jewish population of the Hungarian countryside, but another 200,000 living in Budapest were saved. In many ways, these are the “Vrba Jews” as much as the German Jews saved by Oscar Schindler are known as Schindler Jews, or Schindlerjuden.

Abdol Hossein Sardari عبدالحسین سرداری was born in Tehran, Iran, (c. 1914) and died in Nottingham, UK (1981). Sardari was an Iranian statesman and diplomat who saved the lives of many Jews during the Holocaust. He is known as the “Schindler of Iran.”

Chiune Sugihara 杉原 千畝 (January 1, 1900 – 31 July 31, 1986) died in Tokyo, Japan. Sugihara was a Japanese diplomat who served as Vice-Consul for the Empire of Japan in Lithuania. During World War II, he helped between 10,000 and 40,000 Jews leave the country by issuing transit visas so that they could travel to Japanese territory, risking his career and his family’s lives. The Jews who escaped were refugees from German-occupied Western Poland or Russian-occupied Eastern Poland, as well as residents of Lithuania. In 1985, Israel named him to the Righteous Among the Nations.

The Polish Schindler: Eugene Lazowski was a Polish medical doctor who saved thousands of Polish Jews during World War II by creating a fake epidemic which played on German phobias about hygiene.

After Lazowski’s friend Dr .Stanisław Matulewicz discovered that by injecting a healthy person with a vaccine of dead bacteria, that person would test positive for epidemic typhus without experiencing the symptoms, the two doctors hatched a secret plan to save about a dozen villages in the vicinity of Rozwadów and Zbydniów not only from forced labor exploitation, but also Nazi extermination. Germans were terrified of the disease because it was highly contagious. Those infected with typhus were not sent to Nazi concentration camps. Instead, when a sufficient number of people were infected, the Germans would quarantine the entire area. However, the Germans would not enter the FLECKFIEBER zone, fearing the disease would spread to them also. In this way, while Dr. Lazowski and Dr. Matulewicz did not hide Jewish families, they were able to spare 8,000 people from 12 ghettos from summary executions and inevitable deportations to concentration camps. Jews who tested positive for typhus were summarily massacred by the Nazis, so doctors injected the non-Jewish population in neighborhoods surrounding the ghettos, knowing that a possibility of widespread outbreak inside would cause Germans to abandon the area and thus spare local Jews in the process.

Irena Sendlerowa (more commonly known as Irena Sendler) was a Polish nurse, humanitarian and social worker who served in the Polish Underground in German-occupied Warsaw during World War II, and was head of the children’s section of Żegota, the Polish Council to Aid Jews Irena has often been referred to as “the female Oskar Schindler” in her native Poland for her daring and ingenuity in saving the lives of more than 2,500 Jews (most of them children) in German-occupied Poland during WW II.

Aristides de Sousa Mendes do Amaral e Abranches was a Portuguese consul during World War II. As the Portuguese consul-general in the French city of Bordeaux, he defied the orders of António de Oliveira Salazar’s Estado Novo regime, issuing visas and passports to an undetermined number of refugees fleeing Nazi Germany, including Jews. For this, Sousa Mendes was punished by the Salazar regime with one year’s suspension on half-pay, but afterwards, he kept on receiving his full consul salary until his death in 1954. For his efforts to save Jewish refugees, Sousa Mendes was recognized by Israel as one of the Righteous Among the Nations, the first diplomat to be so honored, in 1966. He has also been called the “Portuguese Schindler.”

Raoul Gustaf Wallenberg (August 4, 1912 – July 31, 1947) was a Swedish architect, businessman, diplomat, and humanitarian who save tens of thousands of Jews in Nazi-occupied Hungary during the Holocaust from German Nazis and Hungarian Fascists during the later stages of WWII. While serving as Sweden’s special envoy in Budapest (July – December 1944), Wallenberg issued protective passports and sheltered Jews in buildings designated as Swedish territory. On January 17, 1945, during the Siege of Budapest by the Red Army, Wallenberg was detained on suspicion of espionage and subsequently disappeared. He was later reported to have died on July 17, 1947, while imprisoned by the KGB secret police in the Lubyanka, the KGB headquarters.

Namık Kemal Yolga (1914 – 2001) was a Turkish diplomat and statesman. During World War II, Yolga was the Vice-Consul at the Turkish Embassy in Paris, France. His efforts to save the lives of Turkish Jews from the Nazi concentration camps earned him the title of “Turkish Schindler,” and he received recognition from the Turkish and Israeli governments in the late 20th century.

The Schindler’s of the World

Yes, on this day, May 19, 1909, Nicholas Winton was born in Wertheim, United Kingdom of Great Britain and Ireland. a British humanitarian who organized the rescue of 669 children, most of them Jewish, from Czechoslovakia on the eve of the Second World War in an operation later known as the Czech Kindertransport (German for “children transportation”).

Would that the world may never need the Schindler’s of the World Again.